This page features the 2021 article

The Illusions of The Modern Synthesis

and the abstracts of the commentaries

Editorial: Expanding the Reach of Biosemiotics

In this commentary on Denis Noble’s paper, I focus on his use of the term “illusion,” and juxtapose it with other potential terms, in particular several others he has used for similar points in his book, Dance to the Tune of Life. His use of “illusion,” if more fully explicated, might be of even broader applicability than in his paper. I ask about potential classes of errors in science and remark about his “principle of biological relativity.”

Noble rightly emphasizes that some modern evolutionary biologists’ neglect of agency is consequential with regard to our understanding of the natural world and real-world ecological developments. I elaborate on biosemiotic ideas on semiotic agency and explain how organisms can change the environment by way of semiotic causation. I also comment on the human language’s role in human Umwelten, and how our linguistically mediated reality can be self-deceptive – as if we lived in a bubble of our own making. Finally, I indicate how we can make the Umwelt bubble of the Modern Synthesis burst.

The author argues that the reductionist illusions of the Modern Synthesis, which Noble criticizes in his target article, are to a large extent resulting from a mere syntactical notion of biological information, neglecting the pragmatic and semantic dimension of information. Although the syntactical notion, introduced by Shannon, has been applied with much success in information theory and computer technologies, it is too narrow to understand biological reality. Biosemiotics can help to clarify the problems identified by Noble, and offers a more adequate biological information concept, which not only may help to overcome these problems in the life sciences, but may also serve to integrate natural-scientific and humanities approaches to life.

Denis Noble convincingly describes the artifacts of theory building in the Modern Synthesis as having been surpassed by the available evidence, indicating more active and less gene-centric evolutionary processes than previously thought. We diagnosis the failure of theory holders to dutifully update their beliefs according to new findings as a microcosm of the prevailing larger social inability to deal with competing paradigms. For understanding life, Noble suggests that there is no privileged level of semiotic interpretation. Understanding multi-level semiosis along with organism and environment contrapunctally, according to Jakob von Uexküll’s theoretical biology, can contribute to the emerging extended evolutionary synthesis.

This essay is a response to Denis Noble’s argument that the evolutionary synthesis was based on illusory science and that it itself is a kind of illusion. The response includes an historical examination of the relationship between evolutionary biology and molecular biology, along with the importance of history in evolutionary biology, which is an historical science. It raises concerns about adherence to one standard evolutionary theory, and urges the reader to consider a more contextualist and historicist approach, one that adopts a more pluralistic view of evolutionary theory. It ends with the provocative question of what evolution would mean if it had no history.

Metaphors involve immense explanatory power and positive impact predominantly in the scientific education and popularization. Still the use of metaphors in science might be a double-edged sword. Introduction of the computer metaphor to many scientific fields in the last century resulted in reductionist approaches, oversimplifications and mechanistic explanations in science as well as in humanities. In this short commentary we developed further the computer metaphor by prof. Noble and the illusions this metaphor led to in genetics, linguistics and consequently DNA linguistics.

Demonstration of illusiveness of basic beliefs of the Modern Synthesis implies the existence of evolutionary mechanisms that do not require natural selection for the origin of adaptations. This requires adaptive changes that occur independently from replication, but can occasionally become heritable. Plastic self-organizational changes regulated by genome are largely incorporable into the old theory. A fundamentally different source of adaptability is semiosis which includes the agent’s free choice. Adding semiosis into the theory of Extended Evolutionary Synthesis completes the distancing from the Modern Synthesis. I focus here on the importance of semiosis as the necessary factor in organisms’ meaning making.

Taking advantage of Denis Noble’s description, in “The Illusions of the Modern Synthesis” of the first illusion, related to the concept of natural selection itself, I will further strengthen the criticism by adding three groups of considerations mainly concerning human cognition: 1) how semiotic brains build cognitive niches; 2) the role of abduction – and in particular of manipulative abduction – in building a semiotic artificial world; 3) the biosemiotics of the so-called disembodiment of the mind. Human semiotic brains are engaged in a continuous process of delegation and distribution of cognitive functions to the environment to lessen cognitive limitations, also and especially taking advantage of what I have called “manipulative abduction”. These design semiotic activities are closely related to the process of cognitive niche construction, which should be regarded as the second major participant, after natural selection, in evolution. An important effect of this semiotic brain activity is a continuous process of disembodiment of the mind that exhibits a new cognitive perspective on the mechanisms underlying the semiotic emergence of meaning processes.

Denis Noble has produced a succinct analysis of the ‘Illusions of the Modern Synthesis’. At the heart of the matter is the place of agency in organisms. This paper examines the nature of conscious agent action in organisms, and the role of affects in shaping agent choice. It examines the dual role these have in shaping evolution, and in the social worlds of scientists that shape evolutionary theory. Its central claim follows Noble, that agency is central to the structure of organisms, and raises careful consideration for the role animal agency and affective evaluations in biology, and in biologists.

Evolutionary biologists, evolutionary epistemologists, and biosemioticians have demonstrated that organisms not merely adapt to an external world, but that they actively construct their environmental, sociocultural, and cognitive niches. Denis Noble demonstrates that such is no different for those organisms that engage in science, and he lays bare several crucial assumptions that define the scientific dogmas and practices of evolutionary biology.

According to Denis Noble, one of the greatest illusions of the Modern Synthesis is embodied in the Central Dogma, a principle first formulated by Francis Crick in 1958. The principle (roughly) holds that DNA makes protein, not the other way around. For Noble, the Dogma has contributed to the illusion that genes alone are responsible for the development and evolution of an organism’s phenotype. Though I am largely sympathetic to Noble’s critique, I argue that there may be alternative grounds for accepting the plausibility of the Central Dogma and also the illusion it perpetuates. 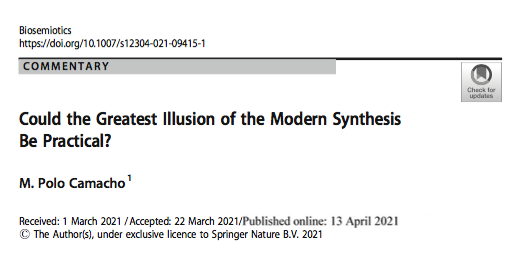 Denis Noble looks at four important misinterpretations of molecular biology concerning evolutionary processes and demonstrates that the new synthesis today looks rather outdated. The modern synthesis is nearly 80 years old. The proponents who worked out the modern synthesis had no access to the current knowledge on cell biology, genetics, epigenetics, RNA biology and virology. Therefore this contribution adds several aspects which Noble’s article does not explicitly mention, providing some examples for a better understanding of evolutionary novelty.

The Modern Synthesis (MS) was based on Darwin’s gradualist view of evolution and early twentieth Century Mendelian and population genetics. Although early results in microbial and molecular genetics seemed to solidify MS views through the Central Dogma of Molecular Biology, accepting their basic concepts as permanent truths blinded MS proponents to the importance of incompatible discoveries in the second half of the 20th and early 21st Centuries. Discoveries based largely on the DNA record have provided a radically different view of genome complexity and biologically-mediated evolutionary change.

Denis Noble suggests that biologists who created the Modern Synthesis were taken in by conceptual traps and illusions hidden in the language they used. Rather than blame language itself, my response counters that all writers are responsible for careful attention to the implications of the metaphors they use, and that Richard Dawkins deliberately chose “the selfish gene.” Noble’s concept of biological relativity restores Darwin’s fuller and more nuanced definition of natural selection and shows how it also accounts for Lamarck’s assertion that acquired characteristics can be inherited. Biological relativity is supported by Maurice Merleau-Ponty’s chiasmic ontology.

The theoretical biologist Waddington drew attention to the damage to scientific progress by COWDUNG – the Conventional Wisdom of the Dominant Group. Despite Popper’s attack on what he called “the bucket theory of science”, that scientific knowledge accumulates incrementally, adding one fact after another, this is now conventional wisdom among biologists. Denis Noble is challenging not only the Neo-Darwinist orthodoxy dominating biology, but revealing the distortions of science produced by this bucket theory of science. The latter is central to understanding the importance of his argument and for seeing the relevance of his work for biosemiotics.

In this commentary I expand on the first of Noble’s illusions, the selection metaphor. Building on my work with Simona Ginsburg on the evolution of minimal consciousness, I argue that the existence of some complex sensory and motor patterns in the living world can be accounted for only through the evolution of conscious choice.

The target article by Denis Noble is an excellent overview of the illusions of the Modern Synthesis that still remains in textbooks despite of the recent criticism. Overcoming these illusions shows the active role of organisms in the evolutionary process and accounts for additional mechanisms such as plasticity of embryo development, epigenetic heredity, multilevel selection, Baldwin effect, and niche construction, which are components of the Extended Evolutionary Synthesis. Adding these mechanisms is certainly an important step forward, but I argue that it is not sufficient for building a new theory of evolution. What is missing is a clear understanding of such notions as agency, autonomy, semiosis, interpretation, and goal-directedness, which so far belong to the humanities and have not been applied seriously in science. Organisms are autonomous and goal-directed semiotic agents capable of interpreting hereditary signs and making meaningful models of their environment. Evolutionary biology needs a semiotic vocabulary to talk about higher level functions in organisms, where specific molecules and mechanisms are only means for integrating functions over the life cycle and adapting to the environment without compromising organism integrity and identity. Such a vocabulary is being developed in biosemiotics; thus, I expect the emergence of a biosemiotic theory of evolution.

This commentary explores biological models of analogical (iconic) and associative (indexical) learning in support of Illusion 1 and Illusion 4 in D. Noble’s target article. The intent is to support Noble’s theses of emergent higher level functionality from lower level stochastic dynamics and his etiological claim that “there is no privileged level of causation” through a biosemiotic lens. Upon these arguments, a case for creative agency via higher-dimensional constraints will also be made in support of Noble’s claim that organismic behavior is actively directed by an agent.

Starting from Denis Noble’s criticism on the modern synthesis, this article argues that (i) the author’s presentation of the modern synthesis focusses too one-sidedly on the phenomenal characteristics of the living, whereby it is made easily suitable to his criticisms, but risks to remain trapped in a territory-struggle; (ii) this criticism lacks an explicit focus on logical matters, and more in particular on the synthetic principles required to situate the relevancy or irrelevancy of phenomenal characteristics beyond territory-struggles. A brief sketch of how the principle of teleology calls for reflexivity allows us to reveal the tension in Noble’s account between, on the one hand, the way in which he stresses the importance of metaphors and language, and, on the other hand, the way in which he invokes empirical arguments to assess the illusory character of certain metaphors. 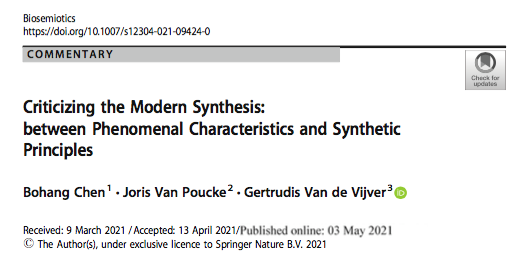